Showing posts from 2013
Show all
- November 16, 2013
At times I don't know how to adequately express myself.  Sincere longing, yearning, and seeking hard after the Lord often get stifled by my circumstances. This song, based on Psalm 84, has been a recent reminder of what I desire to be a reality in my life right now.
How sweet the place where You dwell, O Lord,  My soul longs and faints for You My heart sings out a loud song of joy  For I have known the living God.
I want to be where You are, O Lord I want to be where You are, O Lord I'd rather have just one day with You Than be anywhere else
There's no good thing that You will withhold From those who live to follow You  I'd rather be Your servant, O God Than have the riches of this world
Those who follow You go from strength to strength Those who trust in You are filled with joy.
(c) Stephen Altrogge, 2008, Sovereign Grace Praise

- September 23, 2013
If you doubt whether such description should be given, take a look at the Gospel of Mark.  The very first chapter produces at least three accounts in which Christ exercises His power over physical illnesses. During His ministry, Christ healed countless people with infirmities ranging from leprosy, to fevers, to blindness and lameness.  It is in the story of Lazarus, where Christ raised him from the dead that we see a glimpse of why Christ many times healed those who were sick, or had already died: “This sickness is not unto death, but for the glory of God, that the Son of God might be glorified thereby.” (John 11:4)

Mark 2:1-12 declares the event of the crippled man with his friends who let him down through the roof of the house.  While this story is often told with the culmination of Christ telling the man to “Arise, and take up thy bed, and go thy way into thine house” (Mark 2:11), in reality, that is only a side-note.  The verse immediately preceding Christ’s command to get up and w…
Post a Comment
Read more

- July 18, 2013
"Blessed be God, even the Father of our Lord Jesus Christ, the Father of mercies, and the God of all comfort; who comforteth us in all our tribulation, that we may be able to comfort them which are in any trouble, by the comfort wherewith we ourselves are comforted of God.  For as the sufferings of Christ abound in us, so our consolation also aboundeth by Christ.”    2 Corinthians 1:3-5 Just over two weeks ago, a fellow-student with me and Isaac our freshman year here at Cornerstone Bible Institute became one of the 19 firefighters killed in the Yarnell, Arizona fire.  Isaac and I were privileged to attend the funeral service for Dustin DeFord last Saturday. The testimony for the Lord that Dustin left is being spread throughout this nation, perhaps even in different parts of the world.  The witness that his family is now having in their response to his death is an incredible testimony to the Lord.  Even so, the DeFord family and close friends of Dustin are, without a doubt, havin…
Post a Comment
Read more

- July 18, 2013
Perhaps one of the unique characteristic of the Godhead is that He always WAS.  At the beginning of time, He existed.  At the end of time, He will exist.  Today, He exists.  God had no beginning and He will have no end.

Genesis 1:1—”In the beginning God created the heaven and the earth.”  When time, history, creation began, God was there.  He is the One who created it all.

- July 18, 2013
1 John 2:1 declares “My little children, these things write I unto you, that ye sin not. And if any man sin, we have an advocate with the Father, Jesus Christ the righteous.”

As I read this verse this morning, I knew I had to write on Jesus Christ, our Advocate. I am not a deep theological thinker, so simply put, Christ is the One who stands before the Father on our behalf.  We are the ones who have sinned, and He is our "substitutionary, intercessory advocate.”   Christ has not only finished the work necessary for the believing sinner to be called righteous before the Father, but He now pleads our cause after we become righteous.  While Christ has conquered the penalty of sin, the presence of sin in the believer’s life is never completely gone while we are alive here on earth. Such a state of sinlessness will only take place when the believer is in heaven.

- July 18, 2013
…I have been learning a few things.  Over the last month and a half, Isaac and I have laughed over various things as we set up house and figure out life together as a couple. Here are a few tips for those of you who are not married yet:

1.  It is not always worth it to go for the cheapest quality in order to save money.  Even though many times one cannot tell any difference between a name brand product and a generic brand product, at least in the area of can openers, do not skimp.  I now have two different kinds of can openers in the kitchen drawer, and neither one works.  I am now forced to resort to the faithful Leatherman.

2.  There is a reason for those sometimes intricate, sometimes simple, designs on silverware: It helps that spoon, fork, and occasional knife, from sliding down the edge of the plate and into your food or off the plate.  Trust me—I speak from experience.

3.  Do not try baking while the sun beats outside.  I nearly drove Isaac out of the house it was so warm in…
Post a Comment
Read more

- July 18, 2013
I am so thankful for the presence of the Spirit in my life: He ensures my salvation, He has made me a part of the Body of Christ, He enables me to walk the Christian walk, and He convicts me of my sin.  It is this last aspect of the Spirit’s ministry that is most painful.

I know where I am wrong. I know what I need to do that is right. But it is so hard!  It is in times like these that I particularly feel my sinful desires kick in and struggle against the Spirit. It is easy to excuse my actions. However, it is in times like this that the Spirit once again has to remind me of something that I have unconsciously pushed to the back of my mind for a while: “You are responsible for what you do.  You are not responsible for what others do or may do to you. You are going to answer to God for your actions.  You are not going to answer for the actions of others.  Now, you have the facts.  What are you going to do with them?”

Such bold truths put me between a rock and a hard spot: I cannot esca…
Post a Comment
Read more 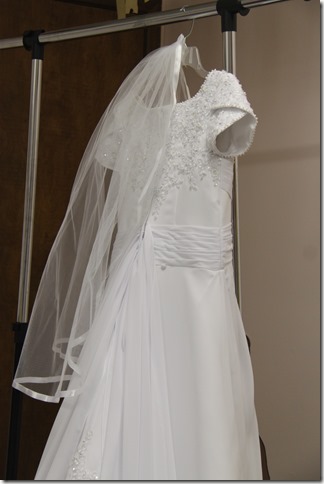 Doing my hair and makeup all myself made for such a stress-free morning…seriously!

Christiana…what can I say but that she was absolutely incredible, in so many ways. I am so blessed to have her as a friend.


My new Mother-in-law!
Little did they know what would happen… White paint and black pants don’t mix very well! Lehrman/Teichroew Family Stanley/Case Family The incredible pianist…thanks Bethany! Finally, he got to ring those bells!

A story in pictures... 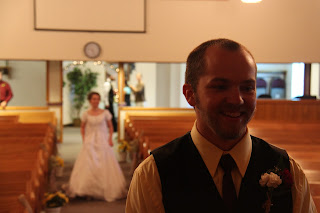 Leading up to "the first look"

Hehe...this picture makes me smile every time I see it!

Um...I think this group has too much fun together!

No goofing around here...not with the dads in the background!


I think this was the part about the island...where no girls were allowed. But then he led into the incredible picture between Christ and the Church and marriage.  It was a memorable moment.

Both Dad and Mom walked me down the aisle...another special time to remember!


I think, just possibly, Mr. Shively was telling Isaac he could kiss his bride.


We hardly even noticed all the commotion..

He was the cutest little bell-ringer!